Kristen Aguirre from 9News Denver did a very nice segment on MEAction Colorado’s planned participation in the Womxn’s March providing some visibility that is greatly appreciated by those whose lives are so badly impacted by this ‘invisible disability’.

Our small but mighty team grew a little bigger with the addition of some last minute volunteers who braved the below freezing weather and helped represent those fighting ME who can’t physically make it through the march. 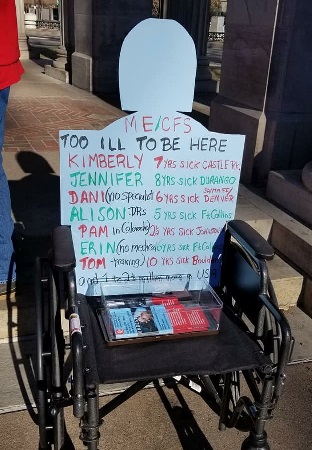 We marched to draw attention to the fact that 75 to 80 percent of the people that are affected by ME are women and historically diseases that predominately affect women don’t get enough attention and research funding.

The Women’s March is a very public inclusive venue and we hoped that we could achieve a lot of awareness by being there.

Several marchers told us they had seen us on TV the night before. And we were able to share information with other people on the route. Altogether a successful event.

1 thought on “Representing ME at the Womxn’s March”