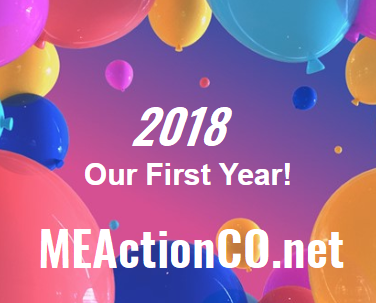 In February 2018, MEActionCO started as a FaceBook group with a handful of members. With guidance from MEAction’s national team, we managed to organize and plan for the first Millions Missing event in Denver. As the group grew slowly to about 35 members we pulled together to organize the event.

May 12th – We pulled it off. It was a drizzly cool day at the state Capitol when we got together for the first time for a morning of speakers and live music and mutual support.  We scored a little media coverage with stories about Pam and Nora.

We had barely caught our breath from the Missing Millions event when the word came from the MEAction Global network that Sen Ed Markey of Massachusetts had introduced Senate Resolution 508: A resolution supporting the goals of Myalgic Encephalomyelitis/Chronic Fatigue Syndrome International Awareness Day.

We got to work and donned our red T-shirts again to meet with a staffers at the offices of our Senators, Cory Gardner and  Michael Bennet.

While we continued to push for sponsorship from our senators for SR 508, the US Department of Health and Human Services (HHS) threw a monkey wrench into the works. HHS had sponsored the CFS Advisory Council (CFSAC). Since its inception CFSAC’s charter had been automatically renewed every two years as its charter expired. But in September, without notice, HHS decided not to renew. Even the members of the Council were not informed.

We immediately renewed our discussions with our senators’ staffers.  As a direct result of our efforts, Sen. Bennet’s office joined Sen. Markey’s and others to contact the HHS on our behalf to demand answers.

MEAction’s National Congressional working group, with a coalition of other ME advocacy groups, drafted a letter to the HHS demanding an explanation and a plan to continue the work left unfinished when CFSAC was abruptly terminated.

MEActionCO members have been meeting in person and via phone calls with staffers from the offices of both Senators and 5 of our US representatives to ask for their support and signatures on the HHS CFSAC letter.  (Look for an update here on that campaign very soon).

While getting a baptism by fire in the workings of congressional lobbying, other actions were being initiated by MEActionCO members:

As we approach the end of the year our member list has grown to 120. Our To-Do list has grown as well. We commend all the efforts of our members in 2018 and invite everyone to participate according to their abilities and interests. There are lots of opportunities and we are all in this together.

1 thought on “Our First Year!”