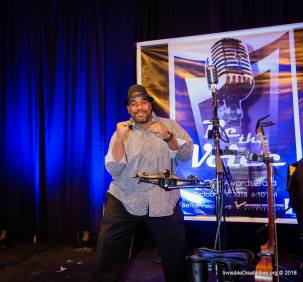 We would like to thank Lee-Anne Du Plooy of Highlands Ranch, CO for attending the 2018 Invisible Disabilities Association’s Award Gala. IDA was a proud supporter of us at the 2018 MillionsMissing. Their mission resonates with many PWME – not being believed about their disease simply because it’s not as visible as many other diseases. The organization promotes believing patients, disease awareness, education and connection for people with invisible disabilities. Two of their key missions are having invisible disabilities recognized by a new symbol that does not represent visible challenges only; as well as their “Cleaner Indoor Air Campaign” which strives to help so many of us with environmental sensitivities.

In addition to being a great fundraiser, the Gala featured live music, headlined by Biff Gore from Season 6 of The Voice, and many awards for activists of invisible diseases. The event was live streamed and I believe that videos of it will be made available at some point. Lee-Anne said she had a great seat up front and that the event was festive, uplifting and inspiring, with lots of good food, and that it was incredible to hear Biff up close like that. You can check out a recap of much of the night’s events at https://www.facebook.com/InvisibleDisabilities/videos/331493710731521/ .